Hi once more,
I've been quite busy during the last months on the new house, but I've found time to still doing other things. One of them finishing the Aston Martin DB4 Zagato for the HistorX mod.
Well, may be is not 100% finished, as some details have to be improved, but I can say that its currect status will be very similar to what you will find once this one is released,that's for sure :) 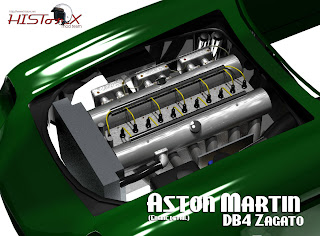 As I usually do, I've used this personal project to learn now things about modeling, etc. I wanted to have a lot of detachable parts on this car. But that put a big problem on my work table: if i want to have a detachable hood i should be able to put something below as having a hole where the nice Aston engine was expected to be found be wouldn't look that good...

I searched on the Net, but there weren't any proper pics to be used so... what's the solution? as always, if you can find it done just do it by your self!
So, using some pics as reference I created something to be put on that hole, as you see in these two pics. 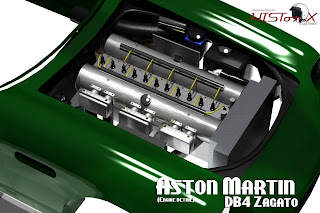 Yes, materials look a bit rough, but more detail wasn't really necessary as I only needed that engine to get some credible renders so i could put a low poly version of it in the car (the engine itself got as many polygons as the full body of the car!).
So, i just created a box and mapped the renders of the engine on it, so in game you can see something similar but with less detail, of course. 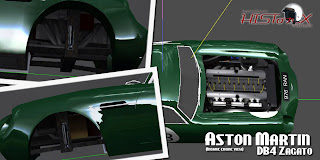 Ok so now i had that hole filled so was time to move on, basically to finish both left and right hand drive versions of the car, as well as to prepare the spinner hi poly versions of them.
These two versions aren't just mirrors of the same model, but have different elements. The RHD version was developed to look more like a racing car, while the LHD was developed to look more like a street version.
So, and to stop my usual long writings here are two pics illustrating the current look of both LHD and RHD versions (including hi poly spinner models): 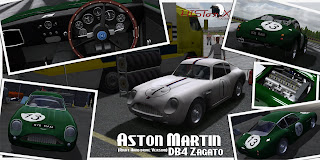 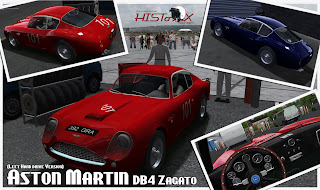