A little update about what's going on

yes, i know I wrote my last post time a go. Time passes fast as hell, that's for sure! The lack of activity here has been replaced by thousands of posts on different forums (and I mean that) and some writing in the cheesy Facebook (which lose interest for me each day, as in the end it's becoming just a tool to feed the gossip side of many people), no need to talk about some important changes regarding real life.

But apart of that I haven't been idle at all.

In the last months I've been improving my 3D modeling and painting skills a lot, which is my main creative activity right now. Being part of HistorX modding team is an exciting and addictive activity, not only by the artistic challenge of creating the virtual version of such wonderful classic cars but for the people I've met doing it. No need to say about how glad I'm seeying that even after so many months we still have new users being added to the thousands who consider this one of the best mods available.

I started with the cockpit view, and first was the turn of the left hand drive version (LHD), which was modeled by Grasshopper, another HistorX's member. Then I improved it and created additional 3D elements (like the steering wheel, buttons, etc), as well as all the textures.

After that one It was the turn of the right hand drive version, which I'm trying to finish now, so stills being in "work in progress" status. As you can see it looks like a racing version, while the LHD looks closer to a street version.

During the past months I've finished other models also, like the Porsche 904 GTS and the Ferrari 250 GTO. And much more are on the way also, but that's something I'll left for future posts :) 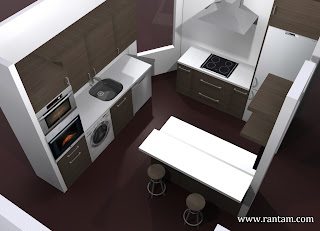 Having bought a new flat now we're in the process of reforming it. And having the possibility of seeing how it would look in advance has a lot of advantages, as you may imagine.

And if you're wondering if I've been composing music lately, I have to admit that composition has been put on stand-by mode for some time. Despite I still like a lot to compose I'm now focused in other artistic activities, as you've seen, but that doesn't mean I'm not interested about music anymore. I still playing quite often, and still having fun doing it, so there's nothing to be worried at all really, as I may come back eventually.

Well, time to go back to real life. Hopefully the next post will arrive sooner than this one :)